AirBaltic to Use SpaceX Starlink 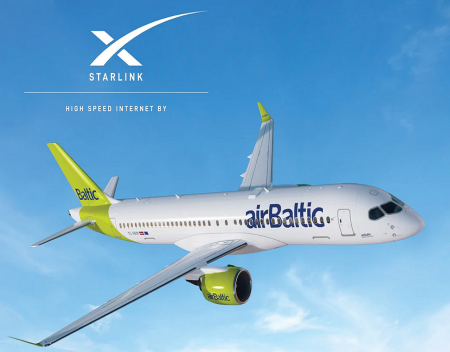 On January 10, airBaltic announced it will equip its entire airplane fleet with SpaceX Starlink to provide complimentary Internet to passengers. The Latvian airline operates a fleet of Airbus A220-300 that provide direct year-round and seasonal short-haul flights from Riga, Tallinn and Vilnius, mostly to destinations within Europe. airBaltic will work with SpaceX to achieve the required Supplemental Type Certification (STC) approval from the European Union telecommunications regulatory agency and plans to begin installing Starlink hardware on the aircraft fleet this year.

"This marks a historic moment for our airline and the industry as a whole," said Chief Executive Officer of airBaltic Martin Gauss, "Soon airBaltic will become the first airline in Europe to launch high-speed, unlimited, and free-of-charge satellite internet on board. We are excited to further improve our service to our passengers who will soon benefit from this internet connectivity onboard our flights within the airBaltic network in Europe and beyond."

"We are glad to have found the right connectivity provider, SpaceX’s Starlink, that fits our needs and meets our wishes. Having the most modern aircraft type on the market, it was the next logical step for airBaltic to implement the most modern available inflight internet solution on this fleet," said Gauss.

"By becoming the first European airline to implement Starlink fleetwide, airBaltic is setting a new standard in ensuring its passengers have an internet experience that they have come to expect in our modern age," said SpaceX Vice President of Starlink Sales Jonathan Hofeller. "With Starlink’s high-speed, low-latency internet, airBaltic passengers will have internet similar to or better than what they experience at home. Customers will walk on the plane and the internet will simply work, making the stress of login pages and downloading large files before takeoff a thing of the past."

With approximately 3,374 Starlink satellites operating in Low Earth Orbit, SpaceX is providing high-speed internet service to over half-a-million customers living in over 40 countries. It is also beaming service to vehicles in motion, such as airplanes and sea-going vessels with maritime coverage.

SpaceX Starlink is the fastest satellite service because it is the only company operating satellites at the low altitude of around 550 kilometers, "which is 65 times closer than conventional geostationary satellites," says airBus, "Starlink achieves significantly lower latency and higher transmission speeds for its end users. Starlink can deliver up to 350 Mbps to aircraft, and with latency as low as 20 ms, passengers can engage in activities previously not functional in flight, including online gaming, virtual private networks, and other high data rate activities," said the company in a press release.