Amazon is Subjecting Alexa to a Performance Review 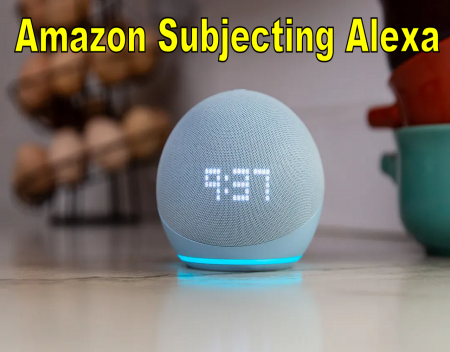 Amazon's Alexa assistant is under the microscope as part of a major cost-cutting review headed up by CEO Andy Jassy, according to The Wall Street Journal. Alexa has become a major part of Amazon's devices and smart home strategy, but documents seen by the WSJ indicate that the company's entire devices unit has had an operating loss exceeding $5 billion in some recent years.

As part of the review, Amazon is looking into whether it should "focus on trying to add new capabilities to Alexa," the WSJ writes. It's unclear exactly what that means, but it appears the company is considering lessening its investments in a product that seemingly doesn't bring in much money on its own.

In a statement, the company voiced support for Alexa but didn't specify how things might change. "In less than a decade, [Alexa has] turned into an AI service that millions of customers interact with billions of times each week in different languages and cultures around the world," Amazon spokesperson Brad Glasser said in an email to The Verge. "Even in the last year, Alexa interactions have increased by more than 30 percent. We're as optimistic about Alexa's future today as we've ever been, and it remains an important business and area of investment for Amazon."

Amazon, like other big tech companies, is looking to tighten its belt amid an uncertain macroeconomic environment. The company is already expecting slower growth this holiday quarter despite its second Prime-focused sales event in October, and Jassy said in the company's recent Q3 earnings release that Amazon is "encouraged" by its efforts to lower costs in its fulfillment network.

On the other hand, Amazon has also announced blockbuster acquisitions for robot vacuum maker iRobot ($1.7 billion) and healthcare provider One Medical ($3.9 billion) this year, so while it may be looking to cut costs in some areas, it's still spending big in others.

"We remain excited about the future of our larger businesses, as well as newer initiatives like Prime Video, Alexa, Grocery, Kuiper, Zoox, and Healthcare," Amazon's Glasser said. "Our senior leadership team regularly reviews our investment outlook and financial performance, including as part of our annual operating plan review, which occurs in the fall each year. As part of this year's review, we're of course taking into account the current macro-environment and considering opportunities to optimize costs."

Source: Re-posted and Summarized from JAY PETERS at the verge.

My Take: We quite like our Alexa. Its pretty awesome.