An experimental horror ARG is testing the boundaries of AI art 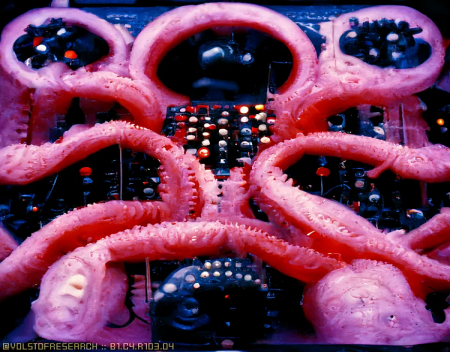 According to ancient Nine Inch Nails lore, we're living in Year Zero, which began on February 10th, 2022. It's a period of extreme dystopia, where a fundamentalist religious government oversees an omniscient Bureau of Morality and a strange phenomenon known as "The Presence", two massive spectral arms reaching from the sky, is spotted across the country.

Year Zero was an alternate reality game that accompanied the Nine Inch Nails album of the same name, and it included events that immersed fans in a theocratic police state. It was designed by 42 Entertainment, which also made Halo 2's I Love Bees ARG and Last Call Poker for Activision's Gun. The game began in February 2007 at the tail end of a "golden age" for commercial ARGs, which included an Audi campaign, ARG companions to major TV shows, and an "interactive clothing" company. Most of the time, these were marketing projects, which Trent Reznor found frustrating for Year Zero. "It‘s not some kind of gimmick to get you to buy a record, it is the art form," he said at the time.

The most evocative Year Zero imagery came from designer / photographer Rob Sheridan, the band's longtime art director who also worked with Reznor on its mythology. (Sheridan stopped working with Nine Inch Nails in 2014.) Nine Inch Nails fans followed breadcrumbs like USB sticks stashed in concert bathrooms, images hidden in song files, and cryptic messages on T-shirts. These were the days before Twitter, before AI as a Service, and before the general public became inured to the idea of mainstream social media, a necessity or utility for modern life today, as a vehicle for fiction.

On March 29th, 2022, an enigmatic tweet appeared from the Volstof Institute for Interdimensional Research (VIIR), followed by eerie images of a forgotten lab filled with organic horrors pushing through from another dimension. This was the beginning of Sheridan's own ARG experiment using A.I art to flesh out a mix of cosmic horror and alt-history science fiction. VIIR invites "players" to examine documents taken from the fictional institute, founded in 1958 by a physicist named Florian Volstof. Volstof studied "soft places" of interdimensional bleeding and tried to communicate with strange organic beings through electronic hardware, until one day, the whole place was incinerated. The "player" is part of a diehard community who wants to figure out what happened to the lab and its unknown location.

Source: Re-posted and Summarized from ALEXIS ONG at theverge.

My Take: I am both excited and terrifed to see what A.I is fully capable of.