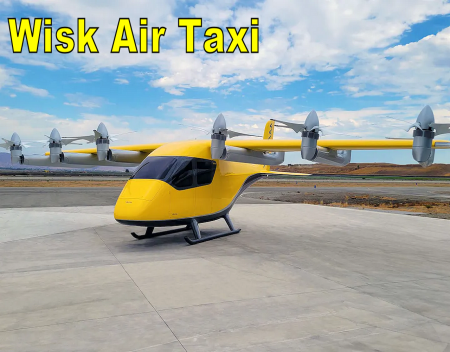 Air taxi startup Wisk Aero unveiled its sixth-generation aircraft, an all-electric four-seater that can fly without a human pilot. The Boeing-backed company said it will seek approval from the Federal Aviation Administration to carry passengers as part of a commercial air taxi service.

Wisk, which was formed in 2019 as a joint venture between Boeing and Kitty Hawk, the flying taxi company bankrolled by Google co-founder Larry Page that recently shut down, is in a race to become the first so-called advanced air mobility company to get the green light from the FAA for passenger testing. Wisk claims that its sixth-generation aircraft is the first electric vertical takeoff and landing (eVTOL) candidate for type certification.

Wisk's aircraft features six front rotors, each with five blades that can tilt either horizontally or vertically as well as six rear rotors that each consist of two blades and remain fixed in a vertical position. The company says it has a cruising speed of 120 knots, a range of 90 miles (140 kilometers) with reserves, and can fly at an altitude of 2,500 to 4,000 feet above ground.

Wisk aims to one day provide an intercity flying taxi service that can be summoned with an app, like Uber or Lyft. The plan is for the vehicle to not have a pilot on board; instead, it will be flown mainly by an autopilot system, with supervision from a human pilot situated remotely. The aircraft would theoretically take off and land from so-called vertiports located on the rooftops of buildings.

The company has said it hopes to launch an air taxi service within the next five years, at which point it predicts conducting 14 million flights annually in around 20 major markets around the globe.

Air taxis, sometimes misidentified as "flying cars," are essentially helicopters without the noisy, polluting gas motors (though they certainly have their own unique noise profile). In addition to Wisk, companies like Joby Aviation, Volocopter, Ehang, and Archer have claimed they are on the cusp of launching services that will eventually scale up nationwide.

They've managed to attract funding from a number of established companies, including Hyundai, Toyota, Airbus, Boeing, Bell, and Uber. Analysts predict that the flying taxi market could grow to $150 billion in revenue by 2035.

Of course, serious obstacles remain before Wisk or any other company can launch a commercial service. The power-to-weight ratio is a huge challenge for electric flight. Energy density, the amount of energy stored in a given system, is the key metric, and today's batteries don't contain enough energy to get most planes off the ground. To weigh it out: jet fuel gives us about 43 times more energy than a battery that's just as heavy.

There have been numerous demonstrations of battery-powered flight, but there are no electric aircraft in commercial operation anywhere in the world.

Source: Re-posted and Summarized from ANDREW J. HAWKINS at the verge.