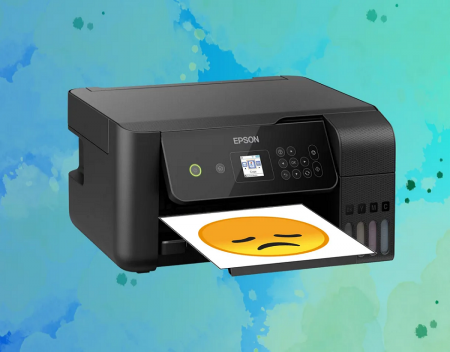 Planned obsolescence continues to blight us.

Epson gained some scrutiny on Twitter in recent weeks after the company disabled a printer that was otherwise working fine, leading to accusations of planned obsolescence. Epson knows its printers will stop working without simple maintenance at a predictable point in the future, and it knows that it won't be cost-effective for many owners to send their home printers in for service. So why not build them to be user serviceable in the first place?

The inciting post from @marktavern mentions that his wife was unable to use her "very expensive Epson printer" after an end-of-service error message appeared.

This isn't anything new for Epson printers, sadly. Reports going back several years mention an infamous error message that reads "parts inside the printer have reached the end of their service life." Epson confirmed to The Verge that the error is related to the printer's ink pads, which had likely become saturated through extended use and were now at risk of spilling into the rest of the printer mechanism.

"MOST PRINT USERS WILL NEVER RECEIVE THIS MESSAGE UNDER INTENDED USE SCENARIOS."
In a recently updated support document, Epson offers several solutions to resolve the problem. These include sending the printer into Epson to replace the ink pads or having a local certified technician do it. Previously (via Wayback Machine), just before the issue gained notoriety, Epson conceded that "repair may not be a good investment for lower cost printers because the printer's other components also may be near the end of usable life." It then added that "most consumers who are out of warranty elect to replace a lower-cost printer when they receive an end of life service message." Now, Epson suggests the feel-good option of sending the bricked unit in for recycling.

Epson does offer customers in North America a free one-time-only Maintenance Reset Utility that lets you temporarily ignore the error message for a "limited time" in order "to complete existing print run needs." But this is restricted to Windows 10, Windows 8, Windows 7, Windows Vista, and Windows XP users, with no official offering for Windows 11 or Mac. You can purchase additional reset keys from less than reputable third-party websites that will typically charge you $9.99 for the service, not that Epson will be happy with you doing so.

Exasperated users found other ways to keep a printer operational after suffering this error, such as manually replacing or cleaning the ink pads themselves. The company's ink pads seem to vary slightly by model, but there are plenty of video tutorials available that document the process. Frankly, all these tasks look fairly simple to perform but none are officially endorsed by Epson.

For its part, Epson says the ink pad issue is rarely encountered by most customers and only affects very heavily used printers, printers used for several years, or consumer printers used in commercial environments. "Most print users will never receive this message under intended use scenarios," said Merritt Woodward, a representative for the printer company. "It is directly dependent on the printer model, frequency, usage conditions, and type of printing over time."

The company also contends that there's a safety issue to consider. "The printers are designed to stop operating at the point where further use without replacing the ink pads could create risks of property damage from ink spills or safety issues related to excess ink contacting an electrical component," reads the Epson support page. This sounds reasonable as Epson doesn't want to be held responsible for property damage. But it's also an admission that the hardware has a known expiration date that can be avoided with maintenance.

Epson is hardly the only printer manufacturer to come under scrutiny for anti-consumer practices, with HP making the news back in April 2022 for remotely disabling printers for customers who canceled their Instant Ink subscription. Canon also became a victim of its own business tactics earlier this year when the chip shortage resulted in cases of Canon printers being unable to recognize its own officially branded ink cartridges. It goes to show that manufacturers can always find new ways to make us loathe needing to use an inkjet printer.

Source: Re-posted and Summarized from JESS WEATHERBED at theverge.

My Take: This kind of corporate greed should be stamped out.