Epic Games thinks it has a solution for review bombing 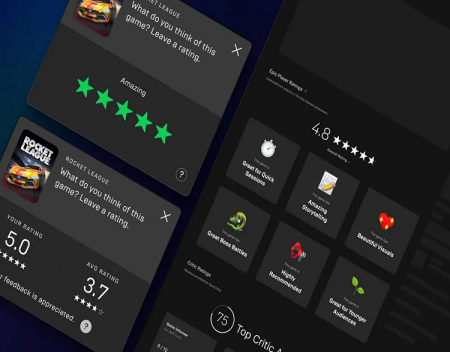 Epic Games has finally introduced a ratings system to its online store, and it’s designed in a way that’s intended to prevent waves of negative user reviews from happening all at once, a practice more commonly known as review bombing.

Instead of allowing anyone to review a game they own, random players who have played a game for more than two hours will be asked to review it on a five-star scale, according to a blog post by Epic’s Craig Pearson. Those scores will then be collected to create the “Overall Rating” for each game.

Occasionally, review-bomb campaigns can point out legitimately harmful consumer practices, but they’re often used in bad faith to protest a creator taking a political stance or if the media in question features people from marginalized backgrounds. Movie sites like Rotten Tomatoes have had to make changes to deal with review-bombing trolls to middling success. Just recently, Disney Plus’ Obi-Wan Kenobi was review bombed when Disney and Lucasfilm condemned racist attacks on cast member Moses Ingram. Valve has had to grapple with the issue as well, announcing in 2019 that it would hide off-topic review scores.

Epic believes its implementation of reviews will prevent review bombing and won’t be overly burdensome to players. “Because these requests are randomized, we won’t spam our players, and we probably won’t ask about every game or app used,” Pearson says. “This approach protects games from review bombing and ensures people assigning scores are actual players of the games.” But fighting review-bombing campaigns is a huge challenge for many tech companies — even Google has systems in place to weed out bad faith reviews — so we’ll see how Epic’s approach works in practice.

Epic will also be polling players at random about their most recent play session to help generate tags for products on the Epic Games Store.

Source: Re-posted and Summarized from Jay Peters at theverge.

Published: June 28, 2022
Home offices have gotten a lot of attention over the last couple of years. When offices all over the world shut down at the beginning of the pandemic, we were all reminded how important it is to have a consistent, comfortable workspace with all the t...[Read More]

Are Babies the Key to Advancing AI?

Published: June 27, 2022
Babies can help unlock the next generation of artificial intelligence (AI), according to Trinity neuroscientists and colleagues who have just published new guiding principles for improving AI. The research, published today in the journal Nature Ma...[Read More]