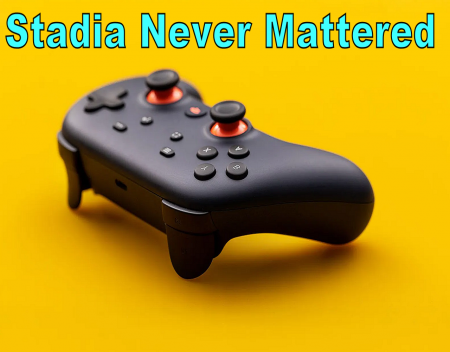 Google's Stadia cloud gaming service will soon be no more, as the company announced that it's shutting down the service early next year. Google touted ambitious plans when Stadia launched, but it never posed any real threat to established players like Sony and Microsoft. And because of Google's general lack of commitment to anything but its biggest cash cow, digital advertising, Stadia never really stood a chance.

When Google first showed Stadia at GDC 2019, it discussed sky-high aspirations that looked disruptive. You'd be able to stream games to all of your devices! You could jump into a game from a YouTube clip! The company was even establishing its own game studio for exclusive titles headed up by industry vet Jade Raymond.

It was easy to dream along with Google. Perhaps one of the biggest tech companies in the world, one that knows a thing or two about streaming things, would be able to succeed where others failed. And when Stadia finally launched that November, it kinda worked. Sure, things were pretty messy, and there were still a lot of missing features, but you could play a handful of video games with just an internet connection.

Things slowly fell apart from there. While the company did add a free Stadia tier six months after launch and addressed small issues like making the Stadia wireless controller work with computers, there just weren't many people playing Stadia games. Google offered some promotions to try and get Stadia into more peoples' hands, but they weren't enough.

In February 2021, the company announced what was clearly the beginning of the end. It shut down its in-house development studios and said it would instead offer Stadia primarily as a platform for other partners to build upon. Now, nearly two years to the date after that news, Stadia will be shut down for good.

In the end, Stadia barely made a dent. Yes, it probably lit a fire under Amazon, which launched its Luna cloud gaming service about a year after Stadia, and Microsoft, which began to roll out Xbox Cloud Gaming in April 2021. But cloud gaming hasn't turned the gaming industry upside down when it arguably had the prime opportunity to. When we were all stuck at home early in the pandemic and couldn't find PS5s, Stadia felt like it should have been the perfect solution to let vast numbers of people easily play games right from whatever screen is in front of them.

But as my colleague Sean Hollister wrote in March 2021, cloud gaming still has too much friction. Can my internet connection run the game? Is the game I want available on the platform of my choice? Do I have to buy it separately, or is it part of a subscription? The questions go on and on, and Stadia was no exception. Contrast that with my Nintendo Switch, which lets me slot in a game cartridge and just start playing, and you can see why cloud gaming still hasn't quite caught on. (Cloud gaming is also an option for a handful of Switch games, and it's generally not a good one.)

It's clear Stadia never mattered all that much to Google, either. Most big-budget video games take years to develop, but the company shuttered its own studios a little over a year after Stadia officially launched. If Google wasn't willing to invest in its own platform, why should other developers?

Developers that did support Stadia were as surprised as everyone else about Thursday's news. Bungie, on its Destiny 2 forums, said that it "just learned" about the shutdown and would send information to affected Stadia players "once we have a plan of action." Mike Rose of No More Robots tweeted his frustration at Google's lack of communication, saying that "hours later and I still have no email from Stadia, and no clarity on what's happening with our games, deals, anything." Even Stadia employees apparently had little notice.

Cloud gaming isn't dead. Xbox's offering is pretty good and getting better. Same with Nvidia's GeForce Now. PlayStation shuttered PlayStation Now but folded in cloud streaming to its most expensive PlayStation Plus tier. Amazon's Luna is expanding, too. Logitech just announced a dedicated cloud gaming handheld. But early next year, Stadia, the service that made one of the splashiest entries into cloud gaming, will become just the next big, ambitious project that Google sends to the graveyard.

Source: Re-posted and Summarized from Jay Peters at the verge.

My Take: Stadia was a complete mess right from day one.