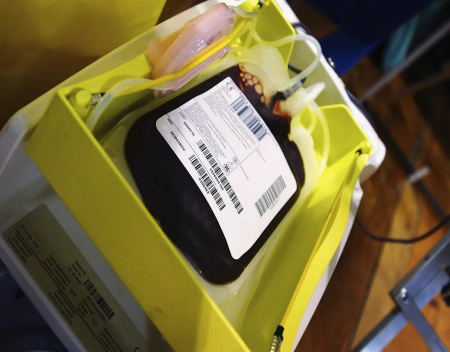 In a world first, two people were injected with red blood cells grown in a lab as part of a clinical trial, the research team announced this week. It's a first step toward seeing if lab-grown blood cells are safe and work in the body, which would be a major advance for people living with rare blood types or blood disorders.

"This world leading research lays the groundwork for the manufacture of red blood cells that can safely be used to transfuse people with disorders like sickle cell," said Farrukh Shah, medical director of transfusion for National Health Service Blood and Transplant in the United Kingdom, in a statement.

The milestone in this trial comes after decades of work trying to figure out how to grow these types of cells in the lab in the first place. The cells used in the trial were grown from stem cells taken from the blood of adult donors. The research team needed 500,000 stem cells to create 50 billion red blood cells, according to the BBC. Of that volume, 15 billion cells were at the right stage of development for transfusion. (For context, healthy adults have about 3 to 5 million red blood cells per cubic millimeter of blood).

"It's really fantastic that we are now able to grow enough red cells to medical grade to allow this trial to commence," Rebecca Cardigan, head of component development at NHS Blood and Transplant, said in a statement.

The infusions were part of a clinical trial run by NHS Blood and Transplant, which is looking to see how long lab-grown cells last in the body compared with donated blood cells. The trial will enroll at least 10 people, and each will get a few teaspoons of the manufactured blood. A few months later, they'll be injected with the same amount of donated blood so researchers can compare their lifespans in the body.

If lab-grown cells do last longer in the body, it could mean people who need regular blood transfusions wouldn't need them as often. That'd be impressive in and of itself. But the trial also lays the groundwork for an even bigger step: creating lab-grown blood for rare blood types that often aren't found in donations.

For example, some people with sickle cell disease, a blood disorder that requires regular transfusions, develop antibodies against certain proteins on some donor blood cells. If that happens, they can't receive blood with those proteins. Research teams could theoretically use the techniques pioneered in this trial to produce lab-grown blood without the problematic proteins.

There's still a lot more work needed before that's a reality, including scaling up production to create the amount of blood doctors would need for clinical use. And donations would still remain critically important even if lab-grown blood becomes a part of regular care.

"The need for normal blood donations to provide the vast majority of blood will remain. But the potential for this work to benefit hard to transfuse patients is very significant," Shah said.

Source: Re-posted and Summarized from NICOLE WETSMAN at the verge.

My Take: This would save tons and tons of people if they can get it to work properly.