Intel and Samsung are getting ready for Slidable PCs 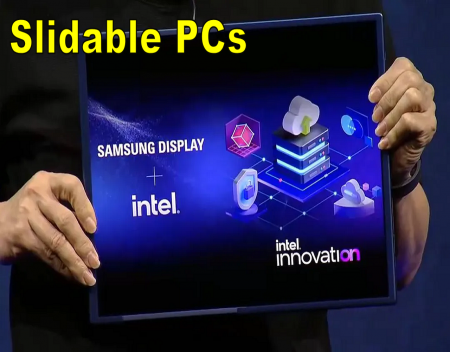 Samsung Display and Intel are working on "slidable" PCs. During Intel's Innovation keynote today, Samsung Display CEO JS Choi appeared onstage to show off a prototype PC that slides from a 13-inch tablet into a 17-inch display.

"We're announcing the world's first 17-inch slidable display for PCs," said Choi. "This device will satisfy various needs for a larger screen and portability as well." Samsung Display has chosen to implement a sliding (rather than foldable) technology for its flexible PC displays, and Choi appeared to indicate that "foldable is gone" on PCs for now.

Intel has been experimenting with new PC form factors for years and was initially preparing for a dual-screen and foldable future before Microsoft dropped its plans for Windows 10X on foldables. These types of new form factors desperately need the software and apps to make them shine, and it's not clear yet how Intel will make slidable PCs a reality.

The prototype device that Samsung Display and Intel have shown off today essentially turns a 13-inch tablet into a 17-inch monitor with a flexible display and a sliding mechanism. Intel was quick to demonstrate its new Unison software on this display, which aims to connect Intel-powered computers to smartphones, including iPhones.

The slidable PC itself is just a concept for now, and there's no word from Intel or Samsung Display on when it will become a reality.

Source: Re-posted and Summarized from TOM WARREN at the verge.