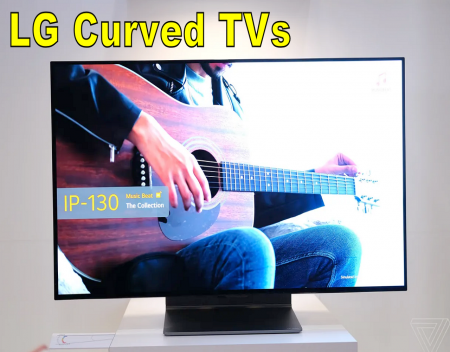 Outside of 3D, curved TVs are probably one of the industry's most ill-advised gimmicks. Unless you sat at a very specific point in front of them, they resulted in a warped image, harsh reflections, and a generally unpleasant viewing experience, for close to no benefit. Seriously, they were terrible. It felt like curved TVs happened because companies could make them, rather than because they should.

It took me a little while to realize it, but LG's new 42-inch OLED Flex, which it's announced this week at IFA and hopes to bring to market this fall, effectively marks the return of curved TVs. It may have a monitor-style stand featuring some gamer-styled RGB lighting, and LG may have confused things slightly by placing the OLED Flex on top of a desk like a monitor in its demo area. But make no mistake, this is a TV-ass TV. It's got four HDMI 2.1 inputs, runs WebOS, and has a built-in TV tuner. It's a TV.

Well, it's a TV with a pretty interesting trick, it transforms. At the press of a button a series of motors inside the device begin to whir, turning it from a traditional flat TV into a curved TV. (You can also control the bending process with the navigation button on the underside of the display.) Or a curved TV that looks a lot like a curved monitor, at any rate. That's how it's able to avoid the curved TV curse; it's not always curved. It's an interesting approach that means you shouldn't have to deal with the problems the curve creates when you're not going to experience its benefits.

To show off exactly when you might want a curved TV, LG had the racing game Forza Horizon 5 hooked up to the display, and was encouraging people to sit around three-to-four feet away from it to get the most out of the vision-enveloping benefits of a curved screen. At its maximum, the screen can bend to an impressively curved 900R, but it can be adjusted on a percentage slider in 5 percent increments, for a total of 20 different curvatures. It was hard to tell amidst the noise of the IFA show floor, but the whirring sound was definitely noticeable, and it goes without saying you probably wouldn't want to hear it mid-game.

Outside of its curving mechanism and chunky stand, the LG OLED Flex is effectively the same as LG's existing 42-inch C2 TV. It's got the same LG Display OLED Evo panel, and supports both Dolby Vision and Dolby Atmos (it can create a virtualized 7.1.2 surround sound). It has a 4K resolution, 16:9 aspect ratio, and a maximum refresh rate of 120Hz. Obviously that means in practice it looks every bit as good as LG's popular OLED range.

The LG OLED Flex is unlikely to be cheap. Spokespeople for LG were unwilling to confirm how much the TV will cost when it goes on sale later this year, but given this thing basically contains a whole $1,399 LG C2, plus a series of no doubt very complex mechanisms to make the automatic bending process work, I'm guessing we're looking at a device costing at least $2,000. Is it worth it for a 42-inch display?

Source: Re-posted and Summarized from Jon Porter at theverge.