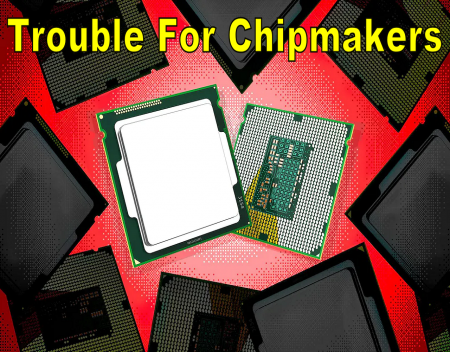 The downturn in the chip industry started in the summer months, as crypto crashes caused blockchain miners to flood the market with previously hard-to-find graphics cards. Almost overnight, demand eased up and caused graphics hardware prices to drop by almost half. Nvidia's CEO Jensen Huang admitted in August that the company made too many graphics cards that now it has to sell them for less money. But Nvidia isn't alone in this mess.

Just last year, the only story about chips was that manufacturers couldn't make enough of them to meet the strong demand for consumer electronics, cars, and other products that require semiconductors. But even as shortages continue for certain types of semiconductors, the story is becoming more nuanced, especially for giants like Samsung and AMD, who were flying high on revenues and profits in 2021 and into 2022.

Now they are being bowled over by a tide that similarly swept up Nvidia and Intel this summer. As reported by Bloomberg, this week, Samsung is reporting a 32 percent sales guidance cut, while AMD warned investors it's going to miss its previous forecast by about $1 billion.

Slumping PC sales provide an obvious explanation for why processors from AMD and Intel are not in as high demand as they were early in the pandemic. Everyone simultaneously had an incentive to upgrade their laptops, gaming machines, and work-from-home setups, but now sales have slowed.

One way manufacturers would like to turn that around, as Intel CEO Pat Gelsinger described on Decoder, is “to enable the PC ecosystem to have better products than what is done by the Mac. Period.” But that hasn't happened yet, and for giants like Samsung, it doesn't even begin to address the slowdown in demand for cloud servers and other machines.

We emailed Gartner analysts Gaurav Gupta, Joseph Unsworth, and Jon Erensen, who confirmed to The Verge that other OEMs are also facing high inventory and low demand. “OEMs had piled inventory in 2021 and first half of 2022 — during shortages — panic buying / double-triple ordering, etc.” said the analysts. They also pointed out that these warnings from Samsung and AMD are due to the weak forecasts in PCs, smartphones, and consumer electronics, even though other areas like automotive are strong comparatively.

Samsung's memory and storage chip business made it the largest chipmaker over Intel in 2018, though the latter company primarily makes x86 processors. In July, Intel suffered losses and reported a 22 percent decline in revenue driven by low PC sales and operating losses to get its Arc GPUs out the door.

Demand for chips of all kinds peaked at the turn of 2022, and companies like Samsung had record high revenue in 2021 with a 26 percent increase in profits (compared to its previous high in 2020) due to higher demand for consumer electronics like smartphones and TVs.

But now WSJ reports that contract prices for DRAM chips dropped 15 percent, and 28 percent for NAND flash chips (the two main components Samsung makes), and cites a TrendForce prediction that those declines will continue to decline until nearly flattening by the end of 2023.

There's also concern about how the Biden administration's just-revealed chip export restrictions to China could affect the semiconductor industry. Gartner's analysts tell The Verge that this will slow down Chinese companies' progress and hurt their long-term goals of becoming self-sufficient technology leaders. The new rules would require manufacturers like Intel and Micron to obtain a license to export semiconductors and chip-making equipment to Chinese companies as part of an effort reportedly intended to impair Beijing's military and technological capabilities.

Source: Re-posted and Summarized from UMAR SHAKIR at the verge.