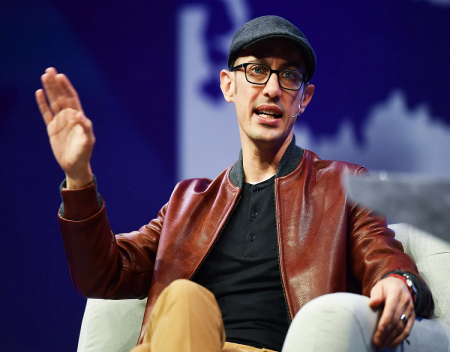 When Steven Levy spoke to Shopify's CEO and founder, Tobias Lütke, earlier this month, Levy was the first to tell him about an unfortunate headline that had just appeared: "Is Shopify the next WeWork?" Lütke, who goes by Tobi, was talking to me about a big rollout of new features for the platform, which provides tools for merchants to digitally sell their wares directly to customers. He built the company into an e-commerce behemoth somewhat under the radar, powering more than two million online stores, from literal mom-and-pop operations to Chipotle. You have almost certainly used it without knowing it, as its branding is subtle. Its growth eventually tripped the collective radar, and late last year the CEO's shiny domed punim graced the cover of Bloomberg Businessweek, which dubbed him the Anti-Bezos.

But this year 16-year-old Shopify hit a wall, thanks to supply chain shortages, a post-pandemic return to actual stores, and a looming recession. Its stock tanked, losing 73 percent of its value. Even the Bloomberg writer, my former colleague Brad Stone, felt compelled to note the irony, wondering if he had cursed Lütke with his lavish attention. The timing of all this was particularly awkward, as Shopify was about to split its stock, 10 shares for each current one. That's not something companies usually do when the price is tumbling. Another corporate maneuver that suddenly seemed questionable was Lütke's plan to change the firm's rules for voting shares so that his control of the company would be virtually unassailable. All of this led to The Street asking that alarming question in its headline, which, of course, I mention to him during our chat.

"Oh, Jesus, I did not see that," Lütke responds, his voice slightly accented by his German roots. (He moved to Canada in his early 20s, and the company was based there until 2020, when he declared that it would thereafter be virtual.)

But he is fighting, and he's eager to talk about the new features Shopify is rolling out to make itself even more influential in international commerce. The stock dip, he says, doesn't reflect the business's performance or prospects. "We said internally, over and over, when stock went up 50 percent, we did not get 50 percent smarter in that time. So when it went down 50 percent, we didn't get dumber." Presumably, even a 73 percent nosedive doesn't indicate a lower IQ.

As for boosting his voting shares, Lükte says he always intended to have minority control, and the current change is due to technical reasons, in part because of Canadian and US rules. "It's not actually my voting," he says. "This is a defensive mechanism against, like, hostile takeovers." Not all shareholders were happy with this move, as the measure squeaked by with only a 54 percent majority. Lükte also points out that new power ends with him and can't be passed down to his successor.

Source: Re-posted and Summarized from Steven Levy at wired.

My Take: Shopify was doing so well. I am not willing to write them off, yet.