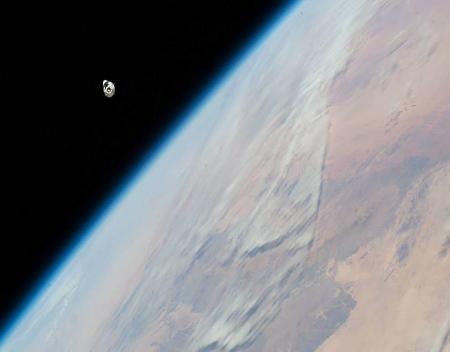 SpaceX Dragon CRS-26 will depart from the Space Station with cargo on Monday.

January 9th, 2023.
On Monday, January 9, SpaceX’s Dragon spacecraft will depart from the International Space Station (ISS) to complete the 26th NASA Commercial Resupply Services (CRS-26) mission. CRS-26 was launched by a Falcon 9 rocket on November 26 from Launch Pad-39A at the Kennedy Space Center. After 43-days, Dragon is scheduled to undock from the ISS Harmony module at 5:05 p.m. ET on Monday to complete the mission. The agency will livestream the undocking process via NASA TV starting at 4:45 p.m. ET, the video is linked at the end of this story.

"Weather currently looks good for Dragon's departure from the Space Station tomorrow and splashdown on Wednesday, January 11; teams will continue to monitor conditions off the coast of Florida," announced SpaceX over the weekend.

Dragon CRS-26 delivered 7,777 pounds of supplies for science experiments and other vital cargo needed at the ISS, including some delicious Thanksgiving treats for the Expedition 68 astronauts working at the orbiting laboratory. Now, Dragon is set to return approximately 4,400 pounds of cargo, including the results of the science research conducted in microgravity and materials no longer needed at the lab.

NASA astronauts Josh Cassada, Nicole Mann, Frank Rubio, and Japan Aerospace Exploration Agency (JAXA) astronaut Koichi Wakata "spent Saturday and Sunday loading Dragon with critical research samples from completed station experiments for analysis on Earth after it splashes down off the coast of Florida," shared agency representatives. The CRS-26 Dragon will re-enter Earth’s atmosphere on Wednesday, January 11. It will make a parachute-assisted landing in the ocean. NASA will not broadcast the splashdown operation, only Dragon's departure from the Space Station.