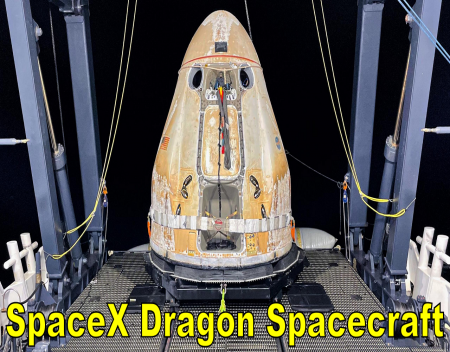 A SpaceX Cargo Dragon 2 spacecraft has safely returned to Earth after delivering several tons of NASA supplies to the International Space Station (ISS).

A little over six weeks after Falcon 9 launched SpaceX's 26th Commercial Resupply Services 2 (CRS2) mission for NASA, Dragon departed the ISS on January 9th. Efficiently lowering its orbit with several small Draco thrusters took about 36 hours, and reusable Dragon 2 capsule C211 eventually slowed to the point that it began impacting Earth's atmosphere. Using its ablative heat shield like a brake pad, Dragon slowed from a velocity of 7.5 kilometers per second (16,800 mph) to about 155 meters per second (~350 mph) before beginning parachute deployment.

At 5.19 am on January 11th, the Dragon capsule gently splashed down off the coast of Tampa, Florida, and was quickly secured by a SpaceX recovery ship. Once onboard, the capsule was opened up, and cargo fresh from orbit was loaded onto a helicopter as quickly as possible. That system – primarily created to rapidly transport astronauts back to NASA medical facilities – also means that scientists can get access to their recovered ISS experiments just a handful of hours after Cargo Dragon splashes down.

View from the recovery vessel as Dragon returned to Earth pic.twitter.com/FbJM8AGICi

SpaceX's second-generation Cargo Dragon spacecraft is nearly identical to Crew Dragon. Both are made up of two main parts. a reusable capsule and an expendable ‘trunk.' The Dragon 2 trunk is a tube-like carbon fiber composite structure covered by a skin of curved solar arrays and radiators. It can also hold several tons of unpressurized cargo.

Dragon's capsule holds a pressure vessel, environmental control systems (ECLSS), all 16 Draco maneuvering thrusters, propellant tanks, docking systems, and an ablative heat shield. In the case of Crew Dragon, the capsule is also outfitted with windows, crew seats, hand control, and SuperDraco launch abort thrusters. Both Cargo and Crew Dragon capsules represent the vast majority of the total spacecraft cost and can be recovered, refurbished, and reflown in as little as four months.

While Falcon 9 infamously failed during the June 2015 launch of CRS-7, every Dragon that has ever reached orbit has been recovered in one piece. Spx-26 was Dragon's 38th mission overall and 35th consecutively successful recovery from orbit.

Source: Re-posted and Summarized from Eric Ralph at teslarati.com.