SpaceX Performs the Most Annual Launches to Date in 2022 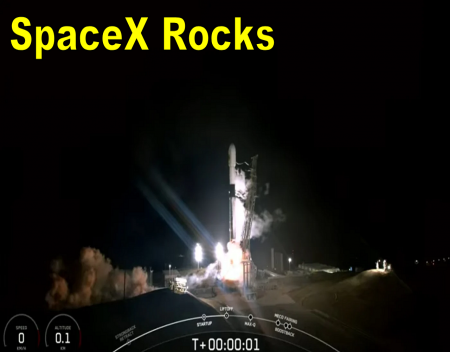 SpaceX’s final spaceflight of 2022 launched an Israeli satellite from California, completing a record-breaking launch manifest with a total of 61 missions performed – the most annual SpaceX rocket flights to date. SpaceX completed 26 launches in 2020, 31 missions in 2021, and doubled that in 2022. The company was capable of impressively increasing the number of annual missions because it can reliably reuse Falcon 9’s first-stage boosters. Reusability enables frequent cost-effective rocket flights. It launched missions at an approximate average rate of once every six days.

The Earth Resources Observation Satellite (EROS C-3) is owned by ImageSat International (ISI). ImageSat is a geospatial intelligence company founded by Israeli Aircraft Industries, EI-Op, and Core Software Technology. It was launched on December 29 atop a veteran Falcon 9 rocket that lifted off at 11:38 p.m. PT from Space Launch Complex 4 East at the Vandenberg Space Force Base, carrying the ISI EROS C-3 satellite into retrograde Low Earth Orbit.

The rocket that deployed the EROS C-3 satellite performed its 11th flight. The Falcon 9 first-stage booster that was reused for this mission is identified as B1061-11; It previously launched: SpaceX’s Crew-1 and Crew-2 astronaut missions to the International Space Station (ISS); Then it launched the SXM-8 audio broadcasting satellite for the SiriusXM radio station; Followed by the launch of SpaceX’s 23rd Commercial Resupply Services (CRS-23) mission to the ISS; and the Imaging X-ray Polarimetry Explorer (IXPE) satellite. The sooty booster also deployed hundreds of small satellites during SpaceX’s Transporter-4 and Transporter-5 rideshare missions. Then it launched the Globalstar FM15 satellite, and two Starlink missions.

Around 8-minutes after liftoff, B1061-11 returned from orbit and touched down on Landing Zone-4 at the Vandenberg Space Force Base. It marked SpaceX’s 160th landing of an orbital-class rocket and the 134th time it reused a rocket’s first-stage. SpaceX shared an incredible video of the landing, shown below.

The EROS C-3 satellite was deployed to orbit around 15-minutes after liftoff. The Earth-observation satellite is equipped with high-definition cameras capable of beaming video of Earth’s surface for ImageSat’s customers which include the Israeli government and military. No detailed information has been released about the satellite due to national security. The solar-powered satellite is designed to have a lifespan of 10 years. It will operate alongside two EROS satellites that have been working in orbit since the early 2000s. The satellites have been vital to coordinate civilian safety operations during major events, like the Afghanistan war, natrual disasters, even to ensure safety during the 2016 Olympic and Paralympic Games.

Here are some links to related topics:
geotab wizard,   wp secure,   how to get backlinks to your website,   oscommerce hacked,   just host hacked,   bluehost hacked,