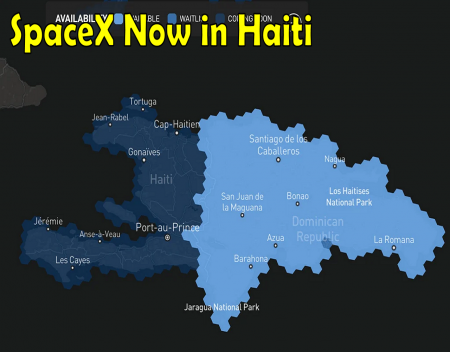 Resscop & Delaporte, Inc, a strategic partnership company that is focused on the economic development and the welfare of Haitians, announced on November 26 that Starlink has obtained a permit to beam frequencies over the Caribbean island for wireless broadband internet services. "Around the globe, Starlink has enabled communities in need to gain access to education, health services, enable remote work and provide critical communication support during natural disasters. With Starlink, rural and remote classrooms can reap the same educational benefits as those in urban areas. Farmers can leverage data-driven approaches to agricultural production, and fishermen can stay in contact with their family," stated Resscop & Delaporte, Inc. representatives in a press release. "When natural disasters strike, Starlink’s services can be deployed rapidly to support emergency responders and enable communication for those impacted."

SpaceX’s Starlink is a game-changer for rural regions and emergency operations, the system can easily be installed in a few minutes by simply connecting the Starlink user terminal antenna and Wi-Fi router to an electricity source, pointing it at the sky, and following the Starlink App instructions to wirelessly access the internet. The phased array user antenna is capable of locating the satellites and automatically adjusting its view of the sky. "In today’s world, the need for complicated infrastructure is no longer the best economic advantage for underserved countries. The need to supply rural internet access with affordable service has never been more urgent, especially for locations where terrestrial technologies may not reach. Starlink has an active fleet of satellites orbiting the planet, providing consumer-based service," said Resscop & Delaporte, Inc.

At the start of 2022, only around 41.4% of the population in Haiti had access to reliable internet service at home; now, Haitians will have a reliable option. "Starlink’s services will provide Haiti a unique opportunity to leapfrog into the 21st century. Starlink can provide connectivity that will help meet Haiti’s connectivity goals, reduce the infrastructure investment required to connect every last-mile and complement traditional internet providers’ service areas," the representatives stated. "The strongest assets of Haiti are the people. Today, the people in rural areas of Haiti do not have readily available access to the internet. With Starlink’s services, the people will be provided the opportunity to obtain reliable internet services. They will be able to obtain remote jobs online, support call centers around the world and obtain vocational school programs directly from their home. They will be able to participate in innovative development programs that will advance their learning capabilities to support the economic development of the country. These services will help enhance the development of the economy of Haiti and its GDP."