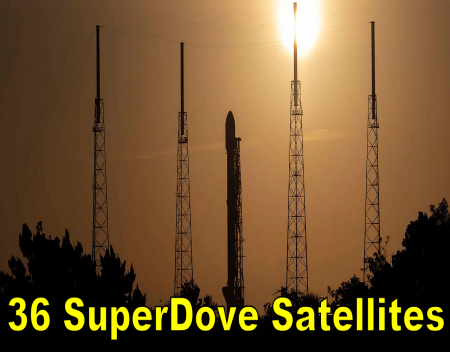 SpaceX will launch Planet's SuperDove satellites during the first SmallSat Rideshare mission of 2023 scheduled for Tuesday, January 3rd.* It will be the company's sixth Rideshare mission called Transporter-6. SpaceX's SmallSat Rideshare Program offers cost-effective launch services by allowing multiple customers to share Falcon 9 payload space to deploy dozens of satellites in a single mission. This gives companies and organizations with a smaller budget the opportunity to launch their projects to orbit.

A Falcon 9 rocket is set to launch the Transporter-6 mission at 9:56 a.m. ET from Space Launch Complex 40 at the Cape Canaveral Space Force Station in Florida. "There are 114 payloads on this flight, including CubeSats, microsats, picosats, and orbital transfer vehicles carrying spacecraft to be deployed at a later time," announced SpaceX. A total of 36 Planet SuperDove satellites will be deployed, alongside dozens of other payloads owned by multiple companies and organizations from the U.S. and abroad.

"We're excited to again work with SpaceX to bring 36 SuperDoves to orbit, our eighth overall launch with the launch provider," said Planet's Vice President of Launch, Mike Safyan. "Once in orbit, these satellites will join our current fleet and work to deliver cutting-edge geospatial solutions to our global customer base."

Planet's SuperDoves satellites are equipped with advanced cameras and technology that enables the constellation to capture around 1.2 million pictures per day. The SuperDove satellite constellation enables Planet's customers to see geographical regions on Earth for a wide range of applications, including: for national security purposes and analyzing the effects of climate change in particular regions. The satellites have captured aerial views of impactful events around the globe, such as: disasters caused by weather and wars. Over the years the imagery has provided vital insight for civilian rescue operations and rebuilding efforts.

"These 36 SuperDoves will replenish our current fleet of approximately 200 satellites in orbit, working to provide a continuous, and complete view of the world from above every day. Each Planet SuperDove is equipped with eight spectral-bands and improved on-orbit capacity that helps to quickly deliver sharp, analysis-ready data to our customers," said Planet Labs representatives. "The data collected by our SuperDoves allows organizations in agriculture, government – both intelligence and civilian agencies – forestry, sustainability, and other industries to make informed, timely decisions."

During the upcoming Transporter-6 mission, five of the SuperDove satellites to be deployed are "adorned with artwork and quotes that celebrate the legacy of Star Trek creator Gene Roddenberry as a part of our collaboration with The Roddenberry Foundation's Boldly Go Campaign," Planet shared. Watch the Transporter-6 Mission livestream in the video linked below around 15-minutes before the 9:53 a.m. ET liftoff on Tuesday morning [*date is subject to change].

Here are some links to related topics:
how to make your wordpress load faster,   oscommerce support,   skuvault programmer,   signs your computer has been hacked,   network solutions hacked,   ideahost hacked,