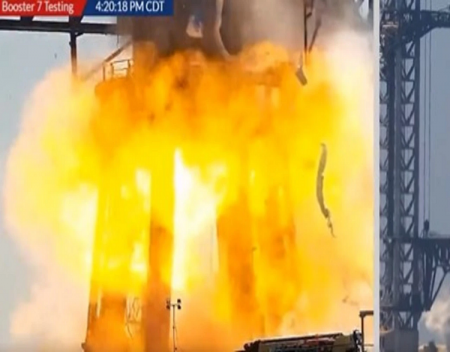 SpaceX is in the midst of preparing its Starship rocket for its inaugural orbital launch, but an apparent explosion of the Super Heavy booster during tests at the company’s facility in Boca Chica, Texas, may represent a serious setback.

The explosion happened around 5:20 p.m. ET, and it was as unexpected as it was severe. No word yet on the cause of the anomaly or whether anyone was hurt during the incident. The explosion was followed by a significant amount of fire in the vicinity of the giant booster rocket; flames and smoke could still be seen wafting from the launch pad an hour after the incident, but the situation at the test site didn’t appear to be worsening.

A static fire test was not expected today, and the launch pad had not been prepared or cleared for such a test (as far as we can tell). Venting from directly beneath the booster increased dramatically in the moments prior to the explosion, which produced a powerful fireball and shock wave. SpaceX did not immediately respond to our request for more information.

The Elon Musk-led company is currently testing Super Heavy Booster 7 at its Boca Chica facility, known as Starbase. The prototype booster, with its 33 Raptor engines, arrived at the launch mount in late June. A Starship second stage will eventually be stacked on top, forming a fully stacked Starship rocket. Musk was hoping for an orbital test flight of the system in July, but that seems unlikely given today’s events.

It’s likely that Booster 7 experienced some sort of damage during the explosion, whether it be to the dozens of Raptor engines or to the booster itself. Likely both. SpaceX will need to fix (or replace) the booster and determine the cause of the anomaly. It’s also not clear if the incident damaged the launch mount, which is equipped with a pair of mechanical arms known as “chopsticks,” which lift and hold the booster in place.

SpaceX is designed to transport cargo and passengers to orbit, the Moon, and Mars. The company is currently under contract with NASA to modify the system as a means for landing astronauts on the lunar surface. The Federal Aviation Administration (FAA) recently cleared SpaceX for site expansion, bringing Starship closer to its inaugural launch.

Source: Re-posted and Summarized from George Dvorsky at gizmodo.

My Take: Its all part of the process to making a great rocket. These things can happen.