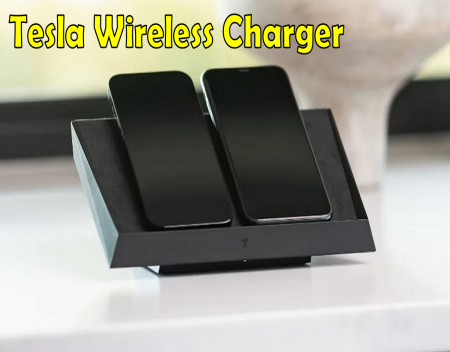 Tesla Launches Wireless Charging Platform Inspired by the styling of Cybertruck. The charger, which is capable of charging three devices at the same time, will ship in February 2023.

Tesla has announced the launch of the Wireless Charging Platform, a wireless charger capable of simultaneously charging up to three Qi devices. The concept is somewhat similar to AirPower, which Apple wanted to create. Tesla Wireless Charging Platform provides 15W of fast charging power per device for up to three devices simultaneously, which is a very attractive and convenient feature.

The angular design and metallic styling were inspired by the Cybertruck. The Wireless Charging Platform features a sleek design composed of an aluminum housing, a premium alcantara surface on which to place devices for charging, and a detachable magnetic stand that can be used for charging flat or at an angle. The platform costs $300 and the first deliveries will begin in 2023.

"Inspired by the angular design and metallic styling of Cybertruck, our Wireless Charging Platform provides 15W of fast charging power per device for up to three devices simultaneously. Its sleek design is composed of an aluminum housing, premium alcantara surface and a detachable magnetic stand that allows you to lay the charger flat or at an angle for better viewing. Featuring FreePower(R) technology, which charges your Qi capable devices such as phones or earbuds placed anywhere on its surface without precise alignment."

In September 2017, Apple announced AirPower, a multi-device charger. It was designed to charge iPhone, Apple Watch, and AirPods at the same time. However, the company ran into problems implementing the idea and the product never made it to market. In 2019, Apple officially confirmed that it was canceling it.

Although Tesla is not in the phone industry, the company has a wealth of knowledge and an excellent team to develop and implement the most unexpected ideas. The Wireless Charging Platform uses FreePower, a technology from Aira that has been used in other wireless charging platforms such as the Base Station Pro from Nomad. Although Tesla's platform does not support Apple Watch charging, it can charge other Qi-based devices such as iPhones and AirPods.