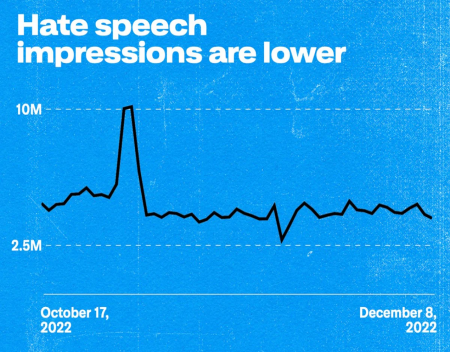 Twitter posted an update on recent efforts to reduce the reach of hateful speech on the platform. The data show that the safety team has achieved a reduction in the number of tweets containing slurs used for hate speech.

As promised by Elon Musk, Twitter 2.0 has become more open and transparent so that users can appreciate what the leadership and team are doing. On Saturday, Twitter Safety released an update on their recent efforts to reduce the reach of hate speech on the Twitter thread.

Twitter Safety clarified that counting the number of tweets containing a specific slur is not an accurate way to measure hate speech. The context of each utterance matters, and obviously not all slur words are used with hate. This issue has already been raised repeatedly by Twitter users who have been trying to figure out whether their use of slurs as an expression of admiration, in quotes, or in funny images, etc. can lead to a ban from the platform. Clearly, Twitter understands that context is important.

The platform said that people will still see slur words in tweets if they follow the account that uses them. However, Twitter will not amplify Tweets containing slurs or hate speech, and will not advertise next to such tweets.

Twitter said it is tracking all uses of slurs, not just the ones that are used in a hateful manner, although it warns that the raw data by itself do not tell the real story. In the chart below, the company showed the impressions of all English-language tweets containing slurs. It can be seen that, despite a few surges, the overall trend is declining.

In the next step, Twitter removed 10 viral tweets from their dataset that contained slurs, but none of which violated platform policy. This gave a completely different picture, which showed a steady downward trend in the number of impressions expressing true hateful language impressions.

The company said it has a lot of work ahead of it. Currently, the team is working on introducing transparency in the app when Twitter limits the reach of a tweet, as previously mentioned by Musk. The platform intends to give users the ability to let them know when they think they made a mistake.

My Take: If anyone can fix Twitter, its Elon.