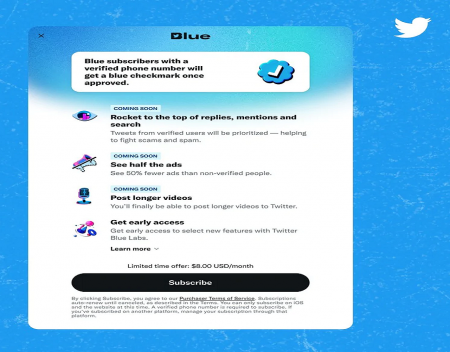 The Twitter Blue subscription service was originally launched last month. However, its rollout has been put on hold in order to make the process more robust and thoughtful. During this time, the team improved the rules and ways to implement the new feature, and on December 12, Twitter Blue was activated again.

Now, users who pay for the service will receive checkmarks that will differ in color, as Elon Musk previously said. Organizations will get a gold checkmark, government accounts will have gray checkmarks, and all individual accounts, whether it is celebrity accounts or ordinary people, will get a blue checkmark. To prevent impersonation, users who attempt to change their nickname, display name, or photo will temporarily lose their checkmark until the account is verified again.

In addition to the confirmation checkmark, subscribers get the ability to edit tweets within 30 minutes of posting them and download 1080p videos. They will also see half as many ads. In addition, Twitter Blue subscribers will soon be able to post longer tweets and gain increased visibility, allowing them to rise to the top of replies, mentions and searches.

Subscribing to Twitter Blue on the web costs $8 per month. However, if you subscribe through an iOS device, it will cost $11 per month. This is likely due to Apple charging a 30% fee for using its Apple Store, a tax that Musk previously mentioned. At the moment, the service is available only for iOS users.

My Take: If anyone can turn around Twitter, its Elon Musk.