What is Kiwi Farms 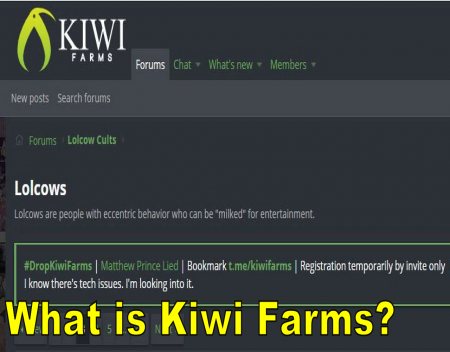 Kiwi Farms, an image-sharing website and forum where users discuss online personalities, describes itself on its homepage as a "community dedicated to discussing eccentric people who voluntarily make fools of themselves."

But the internet forum was initially launched in 2009 as an imageboard, the CWCki forum, to catalog the online history of Christine Weston Chandler, who is also known as "Chris Chan" or "Sonichu" online.

Chandler was arrested on Sunday and charged with incest two days after an audio recording originally posted on Kiwi Farms purported to include Chandler discussing raping her mother, as Insider previously reported.

According to New York Magazine, CWCki began after people trolled Chandler since her homemade "Sonichu" drawings and comics started to go viral among communities on 4chan, an imageboard popular on the far-right. It was founded when Chandler was added to the "troll archive" Encyclopedia Dramatica, New York Magazine reported.

CWCki users built up an archive of what New York Magazine called "every drawing, video blog, tweet, Facebook post, eBay listing, Etsy item, and PSN purchase Chandler [has made]" since its launch in 2009.

Read More: Chris Chan, the online personality accused by police of incest with her mother, has been trolled by the internet for over a decade

According to KnowYourMeme, the forum was renamed Kiwi Farms in February 2015. The CWCki wiki, the database of information on Chandler collected through the forum, is still live and exists separately from Kiwi Farms.

The renaming came after the site shifted focus from not just discussing Chandler, but any online figure or personality that users classify as "lolcows" — in other words, people who could be "milked for laughs," usually without their knowledge or awareness.

Still, documentation of Chandler's life continues to have a major presence on Kiwi Farms.

Here's how the platform got started.

Kiwi Farms has been run by Joshua 'Null' Moon since 2013.
Although there is no known founder for the initial CWCki forum, Joshua Moon, who goes by the name "Null" online, started hosting the site in 2013 before transforming it into Kiwi Farms two years later.

Moon has colloquially been referred to by CWCki moderators as one of Chandler's "Guard Dogs," with them noting how he often tries to help Chandler. Most recently, it is alleged that Moon launched a GoFundMe to help Chan attend a convention.

Moon did not respond to inquiries from Insider.

Three people identified as 'lolcows' on Kiwi Farms have died by suicide
Between 2016 and 2021, at least three suicides were linked to Kiwi Farms.

Friends of indie game developer Chloe Sagal, who took her own life in June 2018, told Oregon Live that she had been subject to harassment by Kiwi Farms users after it was revealed in 2013 that a crowdfunding campaign Sagal claimed was for metal poisoning was actually for sexual reassignment surgery.

The death of Julie Terryberry, who took her own life in 2o16, has been linked to Kiwi Farms by news outlets like Vice and Gizmodo. According to Vice, Terryberry was targeted by Kiwi Farms users prior to taking her own life due to her polyamory and appearance.

Source: Re-posted and Summarized from Charlotte Colombo at insider.com.