Windows 11 could bring a divisive new feature to Notepad 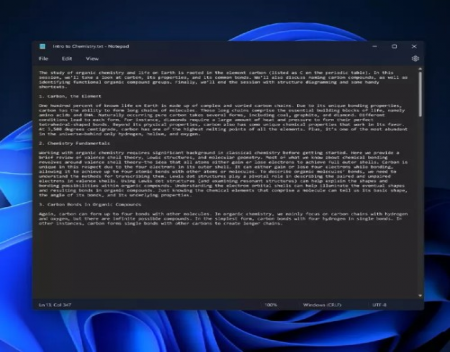 Windows 11 could bring a divisive new feature to Notepad.

Windows 11 could jazz up Notepad by adding tabs into the mix, at least if a leak from a test version of the app is anything to go by – although not everyone is happy about this idea (we’ll come back to that point).

Windows Central spotted a tweet from a Microsoft staff member which mentioned tabs coming to Notepad and displayed a screenshot of the preview version of the application showing tabs in action.

That screen grab came with a clear warning to not discuss the new features or take screenshots – so as you might imagine, when Twitter picked up on the leak, the tweet was swiftly deleted.

It’s no great surprise to see the presence of tabs further expanded in Windows 11, considering that they recently came to File Explorer. For those who could use a quick refresher on exactly what tabs are and how they work, the tabs in File Explorer, or indeed Notepad, are just the same as the ones in your web browser.

While we observed above that it’s no real surprise to see tabs arrive in another place within Windows 11, given Microsoft’s clear ambition to make more use of them outside the browser, it is admittedly somewhat surprising that they’ve come to Notepad. It’s not exactly the most high-powered app, after all, and in fact its core philosophy is all about keeping things very simple when it comes to jotting and editing text.

However, Notepad has received quite a bit of attention in Windows 11, as users of the app will doubtless appreciate. That includes a more modern appearance (rounded corners), font changes, and a dark mode, so in that respect, more revamping isn’t such a shock.

As to whether Notepad really needs tabs, that depends on who you’re talking to. Some users are glad to see the feature arrive – it’s in other similar text editors, they argue, and should’ve been in Notepad already – while others, well, they’re not so keen. The latter camp is afraid of Microsoft bloating up the application with this change – and perhaps more in the pipeline, given the way things have been going? What those folks fear is Notepad will eventually no longer be a simple quick-to-fire up app, taking longer to load for example.

We must remember that this change is still only in testing, though. Cynical types could even argue this leak was spilled to gauge the reaction to the change, but whatever the case, just because a feature is undergoing internal testing doesn’t mean it’ll see the light of day in the release version of the app. However, it’s seemingly a possibility for the future, for sure.