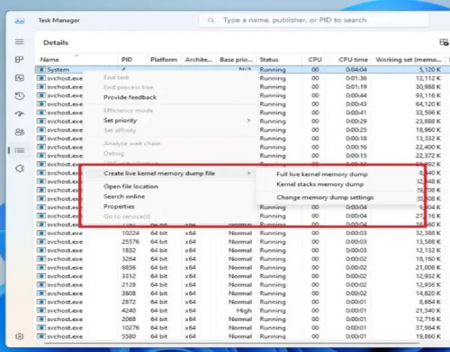 Windows 11 preview build makes it easier to learn why your computer crashes.

Windows 11 Preview Build 25276 is currently available for download from the Windows Insider Program. The big draw is a new diagnostic tool that will help with troubleshooting. Also in Microsoft's latest package are some design tweaks and several bug fixes.

The new tool will allow users to create a live kernel memory dump (LKD) of their system to help diagnose problems. A memory dump, also known as a core dump, is a record of your computer’s memory at a certain time, usually when the OS or an app is having some performance problems. Microsoft states you’ll be able to get a record of those problems as they happen in real-time without interrupting Windows 11 from operating as normal. The goal is to speed up troubleshooting for “high-impact failures and hangs.”

The LKD tool will have its home in the Task Manager under the Details section. Right-click the System process and there will be an entry that reads “Create live kernel memory dump file” in the context menu. You can also configure the tool to capture Hypervisor pages or abort the process if there is insufficient memory.

It’s important to point out that not everyone will get this feature. Microsoft says it’ll see a limited release to Insider Program members so it can monitor feedback. And from that feedback, the company will decide then whether or not the LKD tool will go out to everyone.

Regarding the design tweaks, they’re nothing major. The Settings app will now feature “Outlook attachment data” as part of the new visuals introduced back in November for Microsoft 365 subscription. And the Network Troubleshooter is getting replaced with the more “modern” Get Help app to help you get “specific recommendations” for fixes.

The fixes cover a wide variety of native Windows 11 features. Just to name a few, users can expect a search layout fix for text in right-to-left languages like Arabic, Voice Access to work properly with the Calculator app, and the File Explorer should no longer crash when loading recent files. Microsoft is currently investigating other known issues, including the reports of Insider Program members experiencing system freezes after downloading new builds.

But one of the more interesting aspects of Build 25276 is what’s not being shown officially. Users across the internet(opens in new tab) have discovered Microsoft's plans for retiring the Microsoft Support Diagnostic Tool (MSDT) within the next two years. This is probably for the best as MSDT has had several zero-day vulnerabilities crop up in recent years with Microsoft dragging its feet to fix them. The last fix happened back in August 2022 when the company patched the DogWalk security flaw on MSDT, over two years after it was first discovered.

At face value, it looks like the company is no longer interested in supporting MSDT and is preparing to move on. Currently, it’s unknown what the future replacement will be  –  assuming there will be one.

Also in the build are preview versions for both Apple Music and Apple TV on Windows 11, although they’re missing some major features. Be sure to check out TechRadar’s coverage of these beta apps.