4K webcam uses a built-in gimbal to follow you around, enable gesture controls 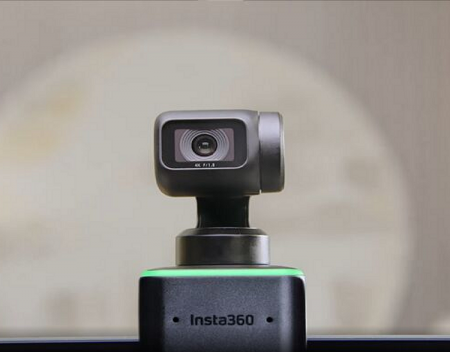 These past couple of years have experienced a bit of a webcam renaissance, as the ability to get an in-person feel from a virtual meeting has become more valuable than ever. That renaissance included the introduction of helpful features, many of which focus on keeping the user center-frame. We've seen cameras play with A.I., and in the case of Dell's magnetic, wireless webcam concept, even magnets to keep your face perfectly in frame. The Insta360 Link announced Tuesday also leverages A.I. auto-framing but adds a much more obvious, yet rare, tool for capturing a moving subject: physical mobility.

Insta360, headquartered in Guangdong, China, and founded in 2015, is primarily known for sports and 360-degree cameras. The Insta360 Link is its first webcam, and it's like if the DJI Pocket 2 and Apple Center Stage had a baby.

The Link is a 4K camera with a proprietary half-inch sensor and f/1.8 aperture living on top of a three-axis gimbal (the webcam can also be mounted on a tripod or stand purchased separately). Insta360's camera is similar to the $269 Obsbot Tiny 4K, but the latter has a two-axis gimbal.

Insta360's Link uses its gimbal in coordination with A.I. algorithms to keep the user in place by automatically framing and zooming. It would be interesting to see how smoothly and frequently the Link makes its movements; sudden changes can be disorienting to the people you're chatting with.

The gimbal-A.I. combo also allows the webcam to respond to hand-gesture controls, which can activate features like zoom and different image modes.

The Link isn't the first to employ A.I. to keep users in focus. Dell's $180 (as of writing) 4K UltraSharp webcam does the same, as do some webcams in premium laptops these days. However, those auto-framing features are highlighted as a way to keep you in the center of the frame within the camera's field of view (up to 90 degrees, in the case of the UltraSharp webcam). The Link's gimbal offers three-axis movement, and Insta360 targets it for a wider range of movement than shifting around in your office chair, like walking around.

The Link can also rotate into portrait mode for a 9:10 image. Hopefully, the gimbal isn't too audible in use, though, as noises and vibrations are distractions all their own.

Other image modes include an HDR mode (limited to 1080p at 30 frames per second); True Focus Mode, which "uses Phase Detection Auto Focus and auto exposure technology for near-instant focusing" from objects at least four inches away, according to Insta360's announcement; Whiteboard Mode for zooming in and focusing on a whiteboard; and DeskView Mode, which lets you switch between focusing on you and the top of your desk.

Unlike Dell's 4K webcam, the Link includes microphones, a noise-canceling duo on the camera's mount. There's no Windows Hello support, though, which 4K rivals like the UltraSharp and Logitech Brio have, as the camera doesn't use any infrared sensors.

We can't confirm image quality without trying out the shooter ourselves, but on paper, the Link is about the most feature-filled device to hit the webcam's second act. For those in need of one of the most powerful consumer webcams, the Link's going for $300.

Source: Re-posted and Summarized from SCHARON HARDING at arstechnica.

My Take: Sounds super awesome. I can't wait to give it a try.