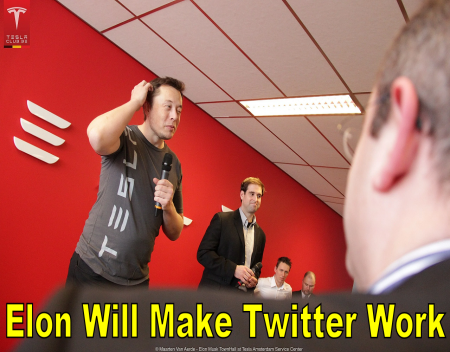 Elon Musk has remained at the top of headlines throughout his takeover of Twitter in recent weeks. And while many have been quick to point out the chaos taking place at the social media company in that time, some have also pointed out that his long-term plans for the platform may just work.

Twitter may have been in trouble long before Elon Musk took over, at least that's what Andy Wu, Assistant Professor of Business Administration at Harvard Business School, said in a recent interview with The Atlantic. While Wu is no bull on Musk's past affairs, he also admits he's been "consistently wrong about projecting out Musk's potential," adding that the billionaire's success makes it hard to want to bet against him.

Wu spoke with The Atlantic's Caroline Mimbs Nyce, who questioned the Harvard Business School teacher on Twitter's past, Musk's management style and what kind of CEO the Tesla, SpaceX, Neuralink and Boring Company head is. And Wu says that Twitter desperately needs some changes that Musk could be set to bring about.

"I think Musk is right in that he needs to take some chances here and try out some new things," Wu said when asked about Musk's management style. He added that Musk has a "certain desensitization" to the way his actions influence the rest of the world, which he says "other executives would be more concerned about."

But when asked if he thought the strategy was wrong, he noted that Twitter has needed some major changes for quite some time, and that it's tough to say how Musk's changes will affect the company in the long-run.

Wu also described Musk as a "one-of-a-kind" executive when asked if he was a good CEO, adding that his accomplishments at SpaceX and Tesla have been something unique. And when Musk has been asked about what makes his companies so special, he largely points to his engineering background.

This can be evidenced by Musk cutting so much of Twitter's staff already, which undeniably cuts costs for the company. And Wu says that's just one of a few key things Twitter will need to do to become profitable.

In a recent statement while testifying over his compensation package at Tesla, Musk also said he considers engineering his primary role at both companies, adding that he expects to eventually find someone else to run Twitter down the road (via The Verge).

"I frankly don't want to be the CEO of any company," Musk said during the testimony. "At SpaceX, it's really that I'm responsible for the engineering of the rockets and Tesla for the technology in the car that makes it successful."

"So, CEO is often viewed as somewhat of a business-focused role, but in reality, my role is much more that of an engineer developing technology and making sure that we develop breakthrough technologies and that we have a team of incredible engineers who can achieve those goals."

Source: Re-posted and Summarized from Peter McGuthrie at evannex.

My Take: If anybody make make twitter work, its Elon.