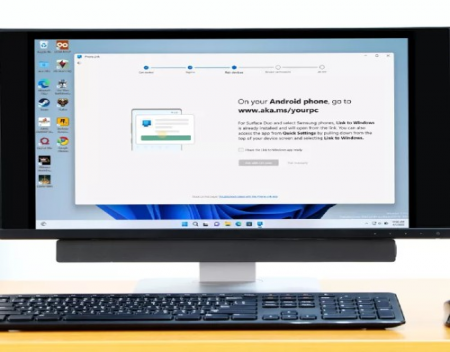 Microsoft is working on an update to its Phone Link app that will allow your Android phone to stream audio directly to Windows 11.

As an aside, it also looks as though Microsoft has given the app another rename, from Phone Link to Link to Windows, as seen on the Google Play Store.

According to Windows Latest, you can enable these sounds on whichever Windows device you've connected your Android phone to. For example, you'll be able to hear dings from WhatsApp or your SMS messaging app - useful if you're working on a computer with a headset connected to it and might otherwise miss a notification.

It's a feature that users have been clamoring for, and while this is a welcome improvement that is sure to help when your Android phone is connected, you may never have used (or even heard of!) Phone Link in Windows 11.

If you're on a Mac and also own an iPad or an iPhone, swapping between devices is something that won't be new to you. For instance, if you've sent an iMessage on your iPad, you can carry on the conversation with a macOS device.

However, it's been difficult to do a similar thing with Windows laptops and PCs. Granted, you can manage your content with OneDrive across multiple devices, but looking at messages or managing notifications between your Android smartphone and Windows computer has never been a straightforward process.

This is where Phone Link has been somewhat of a savior for many users, and it achieves most of what it sets out to do. But for some reason, it's barely been advertised by Microsoft since its debut way back in May 2018.

Being able to stream your Android's audio to your PC is only going to bolster the usefulness of Phone Link, but it could be beneficial for Microsoft to showcase just how good this app is.

It's baffling that such a handy tool isn't strongly promoted as part of the Windows 11 (and Windows 10) software suite, especially since millions of users will have it installed already and be completely unaware of its existence. Perhaps a collaborative effort with Samsung or Google is in order?