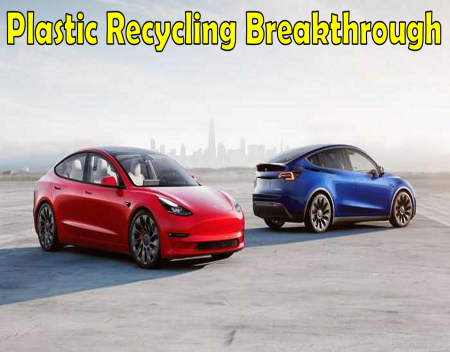 Two companies, Plastonix (Canada) and Elemental Recycling (Texas, USA), have done what others could not in the last half a century: they have just found technologies that recycle all kinds of plastics, an amazing achievement that benefits the environment and the whole world.

This is a true innovation, because up until now there was practically no way to recycle most plastics, especially soft, mixed and dirty or stained ones; but all that has changed now with this breakthrough.

There have actually been other discoveries so far, such as plastic-eating bacteria (which takes a long time to actually work), plastic-eating enzyme (very hard to reproduce…), plastic-eating mushrooms (which only work on certain kinds of plastic…). The answer was found in technology, as is often the case.

The Canadian company Plastonix has just developed a technology that uses several proprietary techniques, including a number of methods, systems, and chemical agents, to reduce any petroleum-based material to processable chips or powder. Some of the composite materials that can be made from these chips and dust are paving materials, pavers, building blocks, tile beams, sheet material, and boards.

In turn, Elemental Recycling - a Houston, Texas company - has gone a step further than Plastonix by developing and selling a plastics recycling machine; its proprietary system will be delivered to customers in the first quarter of 2023. In a one-step process, they convert any type of plastic into high-purity graphite and graphene. Let´s recall that graphene is an allotrope of carbon consisting of a single layer of atoms, arranged in a hexagonal lattice nano-structure. The name is derived from "graphite" and the suffix -ene, reflecting the fact that the graphite allotrope of carbon contains numerous double bonds.

In 2004, the material was rediscovered, isolated and investigated at the University of Manchester, by Andre Geim and Konstantin Novoselov. In 2010, Geim and Novoselov were awarded the Nobel Prize in Physics for their "groundbreaking experiments regarding the two-dimensional material graphene". High-quality graphene also proved to be surprisingly easy to isolate.

Graphene has become a valuable and useful nanomaterial due to its exceptionally high tensile strength, electrical conductivity, transparency, and being the thinnest two-dimensional material in the world. The global market for graphene was already $9 million back in 2012, that is, 10 years ago; with most of the demand coming from research and development in semiconductor, electronics, electric batteries, and composites. Graphene can be used to make smartphones, electronic devices of all kinds, airplanes, and it is one of the composite materials in the manufacture of electric vehicles.

Interestingly, one of the by-products of Elemental's recycling process is the production of hydrogen. The market for hydrogen-based products is growing rapidly and will include solutions such as storage, transportation, energy, and shipping, among many other uses.

Both plastic recycling methods are carbon neutral and provide green sources of materials. Manufacturing products from plastic waste for these companies meet and actually exceed all regulatory standards, an outstanding feature by itself; but the most important thing is that it does not produce any kind of emissions.

In short, Plastonix designed a process that breaks plastics down into their basic molecules, letting them be used to make new products. Elemental Recycling has a optochemical process that can separate plastics into their original polymers; the process is efficient and cost effective, making it even easier for companies to recycle plastic products. Furthermore, Plastonix can recycle plastic waste that would otherwise be sent to landfills.

By helping to prevent pollution and reduce plastic waste, these two companies are making a huge contribution to sustainability and the environment, while also providing a major boost to the circular economy. The monumental task of recycling the 380 million tons of plastic that is discarded every year and that ends up in the oceans and beaches around the world has gotten out of hand: around 80% of all plastic ends up in the oceans and landfills.

The two companies are in fact already revolutionizing the plastic waste industry, providing electric car companies - and in fact, all industries around the world - with a way to save our environment from devastating pollution. Elemental Recycling is conveniently located in Houston; very close to Tesla Inc. headquarters in Gigafactory, Austin, Texas.

Source: Re-posted and Summarized from Nicolas Caballero at torquenews.

My Take: Now thats what I am talking about.