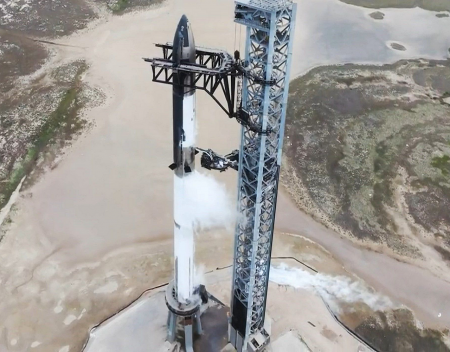 SpaceX's fully-assembled Starship rocket appears to have sailed through a major wet dress rehearsal test on the first attempt.

With the completion of that test, the next-generation SpaceX rocket has taken a big step toward its first orbital launch attempt. Starship measures around 120 meters (~394 ft) tall and 9 meters (~30 ft) wide, making it the largest rocket ever assembled. It's designed to launch more than 100 metric tons (~220,000 lb) to low Earth orbit (LEO) in a fully-reusable configuration. At liftoff, Starship's 33 Raptor engines will produce up to 7590 tons (16.7M lbf) of thrust, making it more powerful than any rocket in history by a large margin.

And on Monday, January 23rd, Starship likely became the heaviest rocket ever after SpaceX fully loaded the vehicle with propellant. Surprising most viewers, SpaceX also appeared to complete the complex test associated with that milestone without running into any major issues.

Today’s test will help verify a full launch countdown sequence, as well as the performance of Starship and the orbital pad for flight-like operations

SpaceX (@SpaceX) January 24, 2023The apparent success is surprising because it simply hasn't been SpaceX's approach of choice while developing Starship. Since SpaceX began assembling Starhopper in an empty Texas field in 2018, the Starship program has been almost exclusively managed to prioritize speed and expect failures. The company almost always preferred to build, test, and learn from minimum-viable-product prototypes as quickly as possible, even if that meant that failures were guaranteed.

Because SpaceX expected failures, it learned from them and always had another prototype ready to carry the torch forward. Starship prototypes rarely completed ground or flight tests on the first try, as SpaceX was simultaneously learning – often catastrophically – how to test and operate those vehicles. The culmination of that failure-as-an-option strategy was a series of seven suborbital Starship tests – two short hops of identical prototypes and five launch and landing attempts of five more advanced prototypes between August 2020 and May 2021. On the fifth attempt, after four failures, a full-scale Starship successfully launched to 12.5 kilometers (~41,000 ft), shut off its engines, fell back to Earth, reignited its engines, flipped around, and landed in one piece.

By all appearances, the campaign was the ultimate corroboration of SpaceX's development strategy. In the second half of 2022, however, SpaceX decided to dramatically change the Starship program's approach to risk management and systems engineering. Starship testing has become exceptionally cautious over the last several months, as a result.

From fail-fast to slow-and-steadyThere is a small chance SpaceX simply got lucky, but Starship's first fully-assembled wet dress rehearsal test appears to indicate that that caution has paid off. Combined, both stages of the rocket – Ship 24 and Booster 7 – collectively completed dozens of separate proof tests and static fires since mid-2022. They also made it through several far more limited tests while stacked.

Having cautiously characterized each prototype about as well as it possibly could, SpaceX finally pulled the trigger on January 23rd. After hours of conditioning the Starbase, Texas orbital launch site's giant tank farm, SpaceX opened the floodgates and loaded Ship 24 and Booster 7 with up to 4860 tons (~10.7M lbs) of cryogenic liquid oxygen and liquid methane propellant in about 90 minutes. Once fully loaded, the combined weight of the rocket and propellant likely exceeded 5000 tons (~11M lbs), making Starship the heaviest rocket in history. The next heaviest rockets ever built, Saturn V and N-1, weighed around 2800 tons (~6.2M lbs) fully loaded.

SpaceX was also able to drain Starship and return its propellant to the pad's ground storage tanks about four hours after filling the rocket.

Starship is FULLY fueled for the first time! https.//t.co/CBWHLyfMUT pic.twitter.com/L9fTcIdAew

Cosmic Perspective (@considercosmos) January 23, 2023"Flight-like" testingThe company later confirmed that the test was a "full flight-like wet dress rehearsal," as suspected, and noted that data gathered from it would "help verify a full launch countdown sequence, as well as the performance of Starship and the orbital pad for flight-like operations." Parts of the test visible from unaffiliated webcasts like NASASpaceflight's seemed to confirm as much. Shortly after Starship was fully loaded, for example, SpaceX activated the orbital launch mount's fire extinguisher system, seemingly practicing the moments before the rocket would otherwise ignite its engines and take flight.

At no point during the wet dress rehearsal did SpaceX appear to enter any kind of hold or abort, indicating that the rocket's systems were all working well enough together to smoothly complete it on the first try. The only mildly concerning behavior visible during the multi-hour test came shortly after Starship was topped off. Booster 7 opened one of its methane tank gas vents to relieve pressure and instead appeared to vent liquid methane, producing a flammable cloud thousands of feet long. More likely than not, the Super Heavy was slightly overfilled, and the liquid vent was an intentional response to that error. The cloud of methane thankfully did not find an ignition source, and Starship went on to finish the test as planned.

First ever Starship full stack wet dress rehearsal in the books. Fully loaded with over 10 million pounds of propellent along with umpteen thousand tons of ship and booster. Big things are happening at STARBASE.#Starbase #Starship #SpaceX Me for WAI Media @FelixSchlang pic.twitter.com/lVatHb5WhV

Kevin Randolph (@CosmicalChief) January 24, 2023Booster 7's accidental liquid methane vent was without a doubt the largest vent in Starbase history.SpaceX has a lot of work left to prepare Ship 24 and Booster 7 for Starship's first orbital launch attempt. Booster 7 must still complete one or several more static fires, during which it could become the most powerful rocket ever tested. To reduce risk, SpaceX will likely remove Ship 24 while testing Super Heavy, and reassemble the rocket only if Booster 7 passes its tests. SpaceX also needs to repair the pad after static fire testing and work with the Federal Aviation Administration (FAA) to finalize Starship's first orbital launch license.

But after many false positives, Starship's successful completion of a wet dress rehearsal on the first try has confirmed that the rocket's orbital launch debut is – for the first time – actually close at hand.

Source: Re-posted and Summarized from Eric Ralph at teslarati.com.